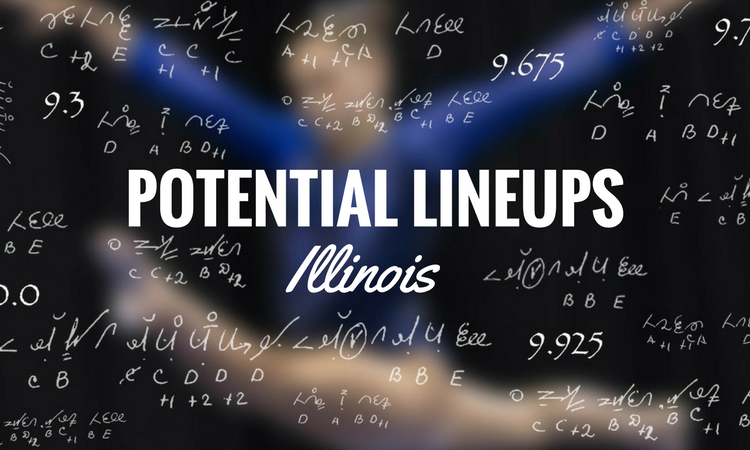 The next Big 10 team we’ll analyze is Illinois, one of the many teams that participated in the coaches’ merry-go-round preceding the 2018 season. Losing Erin Buchanan, Rebecca Cuppy, Sarah Lyons and Brielle Nguyen costs the Illini seven of their regular routines, meaning it’ll be up to the incoming gymnasts to help their new team forge ahead and reclaim a top 20 ranking like in year’s past.

Vault has not been a strong event as of late, falling behind the pack a little as far as difficulty since the devaluation of the Yurchenko full. This year will likely continue that trend, with the incoming class only bringing 9.95 start value vaults. Nicole Biondi competed a strong full but more recently switched to the half, which has a more difficult landing. However, we think she’s actually a little cleaner on the half, and the Illini vault squad could use the variety—even if it doesn’t mean an increase in difficulty. Grace Gough and Kasey Meeks both compete Yurchenko fulls, with Gough’s the cleaner of the two.

As far as returning vaults, look for Lizzy LeDuc and Rae Balthazar to be leading the pack with their fulls. Mary Jane Horth also returned to competition last year with a full after being injured in 2016. Karen Howell and Jordyn Givens rounded out the vault squad last year, with Howell competing a full and Givens switching between a full and a layout. Haylee Roe was also an occasional contributor, but with a only a Yurchenko layout, she likely won’t make the top six. Take a look below at our vault lineup for the Illini this year.

We wouldn’t say bars is a strong event for the freshman class, but it’s going to need to contribute if Illinois is going to survive the loss of Buchanan and Lyons, who were both solid bar competitors. Gough is actually the one strong bar worker of the bunch and has huge amplitude on her Ray and solid leg and foot form throughout. She even has a college-ready dismount, with her giant full directly connected to a double tuck. Biondi’s set is passable, despite some flexed feet and the occasional short handstand, which should score decently in college competition. Tessa Phillips has lovely, long lines, but she does have some short handstand issues and can sometimes miss-time her release. If she can polish up, she might make a good alternate option for the team.

Regular competitors Balthazor, Howell, Horth and LeDuc should all be expected to return to the lineup this season, with Horth’s easily the strongest set of the four. She scored 9.85 or higher on eight out of 13 routines last year, so she’s definitely the best choice for anchor. Save for one miss in the entire season, Balthazor hit every routine between 9.725 and 9.9. She’ll likely make a great lead-off if she can keep that up. While we fully expect LeDuc to continue in her all around campaign, bars was one of her weakest events last season, with a total of only five hits on eleven routines. However, despite this, we can’t leave her out thanks to her AA potential. Also rather inconsistent was Howell who had the most falls (three total) of any Illini on bars last season. However, her 9.875 season high makes a very convincing case for her continual appearance in the lineup. Rounding out the bars possibilities for Illinois are Rachael Donovan and Lindsay Dwyer. Both only competed a handful of times in 2017 but have had hits and misses and strong foundations for their routines. While they’ll likely serve as alternates, they’re worth keeping an eye on. Here’s how we think the bar lineup will play out for Illinois in the coming season.

Perhaps the most baffling event of the four for Illinois is beam. With most of their returners not consistent enough to lead and not high-scoring enough to anchor, it may be up to the freshmen to reignite the spark. Biondi has a strong set that scored quite well in club, working the beam with a deliberate, steady confidence. Kylie Noonan is a beam and floor specialist that will make a huge difference to Illinois, as she’ll be able to contribute late lineup routines thanks to her gorgeous lines and calm balance. Gough has long lines and beautiful split positions, but she’s a bit wobbly to be considered a safe bet for the lineup. She may make a solid beamer yet, but new head coach Nadalie Walsh will have to work with her to get her there.

As far as the veterans go, expect to see excellent performances from Horth and LeDuc. Their duo of routines should close out the lineup with huge scores, as both broke 9.9 last season. Bridget Hodan didn’t have a single miss in 2017, scoring between 9.8 and 9.925 on every routine. She’ll make a strong lead performer to start the squad off. Roe is also another strong beamer—quick and confident throughout and capable of scoring 9.85+ on a regular basis. Howell is capable of decent scores and only had one miss last season, but with all the new talent, she may be bumped out of the top six in her sophomore season.

Our last alternate pick is actually Balthazor, who had a lovely exhibition routine last season and was a confident performer in her club days. We’d love to see her make the competitive lineup at least once this season, and we think she’d put up strong scores for the Illini. Take a look below at the rest of our proposed beam squad.

Floor is one event where the Illini can’t field a full lineup without the freshmen. Biondi and Noonan are the two best choices to contribute, as both have had both great scores and E passes in level 10. We also love Phillips’ work on the event; she’s an engaging performer and has gorgeous lines and toe point. She may not have the most difficult tumbling, but she can definitely bring the fun when she competes. Gough doesn’t have the big personality for a typical NCAA floor routine, but her tumbling is clean and her lines are gorgeous, so she may make a solid alternate option.

The five returning floor performers include Hodan, Horth, Howell, LeDuc and Roe, all of whom are capable of 9.85+ scores. LeDuc is a spectacular performer with great pop in her tumbling, and Hodan is another strong contributor with the only returning E pass on the team with a front double full. Closing the lineup with them will be a huge asset, especially at home meets where they’ll be the last two competitors in the competition. Howell had a season high of 9.875 last season, but she did have some inconsistent weeks as well, sometimes dropping down to the 9.6s. She’s still a solid competitor, but she may get buried in the middle of the lineup to mitigate any scoring issues she might have. Roe, on the other hand, is a very steady performer but couldn’t seem to break the 9.85 mark. She might make a good lead-off with her strong consistency, despite having lower scores. Horth only performed on floor a few times last year, with a few exhibitions and one competitive outing. We don’t expect to see her on floor on a weekly basis, but she’s definitely a strong candidate when she is able to put together all four in one go. Here’s how we’d line up the floor squad for Illinois.

In the all around, we fully expect to see LeDuc returning on a weekly basis, having earned four titles in 2017, including a career-high score of 39.5. Her beam and floor put her ahead of most everyone else on her team, so expect her to capitalize on those events. We also epect to see Horth make another bid for the AA, though again, it may not be on a weekly basis, as floor last season was rather spotty for her after her injury in 2016. Freshman Biondi could also very well sneak into all four lineups, making her quite valuable as Walsh develops her into a future team leader.

Overall, Illinois’s picture for the 2018 season looks positive. Seniors Horth and Hodan provide strong leadership in their respective lineups and LeDuc will continue to be a powerhouse. The Illini freshmen will have good examples to follow, and Walsh should have a strong basis to develop the program as her own.