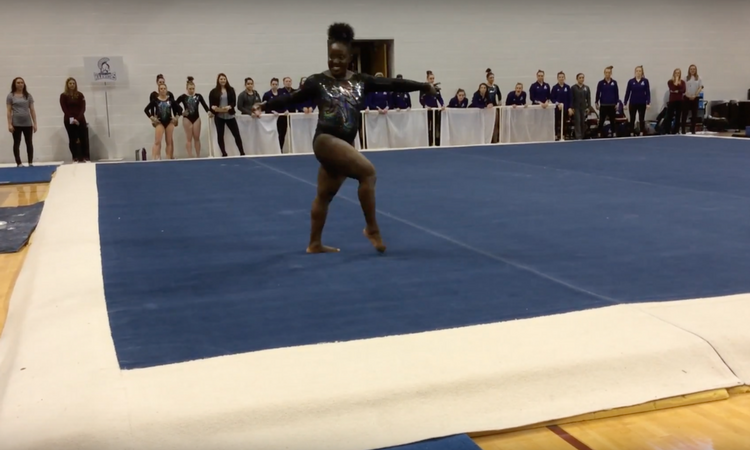 Individual stars can make or break a team’s success. While less common in Division III, there are still many that can have a huge impact on a team. Whether it is contributing the top scores on each event they compete, winning individual event titles or competing steadily in the all around, strong individual contributors are fun to watch in DIII. These stars can draw recruits and build the program for years to come

Kowalik is a rising junior and already a two-time NCGA beam champion. Additionally, in 2017 she placed second on floor and vault at the NCGA East Conference Championship. While she doesn’t compete bars, Kowalik is a star on her other three events. This is especially impressive at Brockport, a team known for event specialists and a very deep roster with few gymnasts competing multiple events. Her skills include a double back and rudi to split jump on floor that could challenge many DI lineups. She showcases a nice Yurchenko layout full on vault as well. Her beam is a true highlight and includes a front aerial, back handspring layout series and switch leap to back tuck. Her steady confidence is apparent, which is surely why she is a two-time champion on the event.

Tribbett really became a star for Hamline during the 2017 season. She competes vault, beam and floor for the Pipers and has the highest RQS on the team on vault and floor and third highest on beam. Not only is Tribbett’s scoring potential high but she is incredibly consistent as well. Her powerful handspring front on vault was a new addition in 2017 and boosted the Pipers lineup. Her beam is confident with a powerful front toss and often stuck front full dismount. But her true standout event is floor where she has fun choreography, a giant double back and clean front combination passes.

Ashley White is a complete standout for Centenary. In 2017, she qualified to NCAA regionals for the second year in a row and was the only DIII gymnast to do so. She has the highest scores for her team on all four events, as well as the highest all around and bar scores in DIII. Additionally, White competed at USAG nationals and earned All-America honors on beam and was a second-team All-American in the all around. She competes a Yurchenko layout half that is quite stickable, a layout to two feet on beam, a Higgins to Jaeger to bail combo on bars and a huge double layout dismount. Not only does White have impressive form and amplitude on all events, her cat-like ability to stick landings really sets her apart and makes her that much more impressive.

DiBiase is Rhode Island’s strongest all arounder, qualifying to NCGA nationals in 2017. She is the team’s highest scorer on bars and was the second highest scorer on vault, beam and floor last season. Allie improved a lot last season, is very consistent and will only continue to improve as her career continues.

Clemens competed all around all season and sat around seventh in the standings. She ranks highly on every event and was consistent all season long. Clemens had the second highest score on bars, fourth highest on beam and fifth highest on vault and floor. She placed 12th on bars and was a second team All-American on the event in 2017. She competes a clear hip to gienger to bail, as well as a blind full to double tuck on bars. On floor she has a huge double pike and also completes a powerful, well-executed Yurchenko layout.

Puryear is a rising senior who competed in the all around for the Bears last season. Her best event is floor where she leads the team in RQS, as well as highest scores. She finished the season ranked sixth in the all around and was very consistent across all four events. On floor she’s primarily a front tumbler, is clean and has good landing security, which brings in big scores on the event. Puryear competes a pirouette to toe up, pirouette to bail and a blind to full-twisting double tuck on bars. Additionally, she competes a strong tsuk layout that usually scores well.

Wiekamp has been a star for La Crosse since she arrived as a freshmen. She has already won two national titles, one on bars and one on vault, and has amassed five All-America honors thus far. In 2017, Wiekamp finished second in the all around at NCGA nationals. In a team as strong and with as much depth as La Crosse, it can be difficult to stand out but Wiekamp is the leading scorer on vault and second highest on floor. Wiekamp competes a Yurchenko full with lovely shape and a commonly stuck blind full to double tuck on bars with her legs glued together. Wiekamp is confident and clean in all her skills, which really sets her apart.

Tkaczuk is a rising sophomore who competed in every meet on bars and beam and a few times in the all around for Oshkosh last season. While she struggled a bit with consistency during her freshman campaign, her potential is very high. She is the current NCGA bar champion and leads the team in high scores on bars and beam. She competes a Tkatchev connected to a pak on bars, as well as a sky high double layout. On beam she has a confident, quick rhythm and performs a front aerial, back handspring layout and cat leap to side aerial. On floor she competes a double pike and a double tuck along with some nice combination tumbling. She only competes a Yurchenko layout on vault, but it’s clean and powerful enough to bring in strong scores. Expect big things to come from this rising sophomore out of Oshkosh as her potential is huge and she still has three years of competition left to soar.

O’Donnell is the reigning NCGA national champion in the all around and vault, as well as the NCGA West Woman of the Year in 2017. Plus, O’Donnell won the floor title at NCGA nationals in 2016. Heading into her junior year, she has already amassed an impressive seven first-team All-America honors. Additionally, O’Donnell holds Whitewater’s school record in the all around, which she set in 2017. She is clean and consistent with good difficulty, which has lead to her stardom in DIII gymnastics. She competes a lovely blind full to Tkatchev on bars, a powerful front tuck on beam along with a rudi dismount and a Yurchenko layout full on vault. Her floor routine has impressive difficulty, beginning with a front double full, a double tuck as her second pass and ends with a front layout to rudi. O’Donnell heads into her junior year ready to continue to dominate the rankings on all four events and looks to lead Whitewater to another national title.

Jackson is an all arounder for Winona State and is a huge asset to the team. She is the 2016 NCGA all around champion and the 2017 NCGA champion on Floor. She additionally has four first-team All-America honors. Jackson leads her team on vault, beam and floor in both highest scores and RQS, and is third in those rankings on bars. Jackson is incredibly powerful and fun to watch thanks to her difficult routines showed on all four event. Her Yurchenko full on vault has as much amplitude as many DI gymnasts, and her powerful and consistent bar routine is impressive as well. On Beam, Jackson competes a back handspring layout, standing layout step-out in combination and beautiful leaps. But her best event is floor. Her full-in is a crowd favorite and will help her continue to be a star in her senior season as she tries to lead Winona State back to NCGA nationals as a team.

Follow all the action this season by subscribing to the NCAA Gym NewsLetter here.