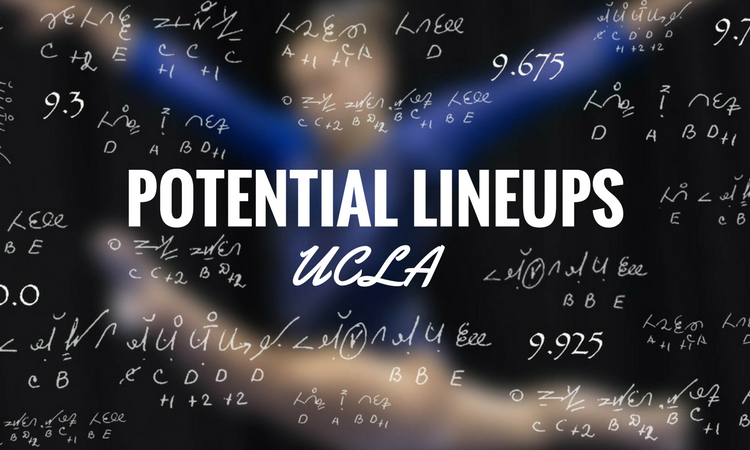 This week we’ll be moving across the Pac-12 to continue our lineup analysis with UCLA. The Bruins are coming off a rollercoaster of a season, which culminated in a fourth place finish at nationals. The team loses superstar floor workers Angi Cipra and Hallie Mossett, as well as beam stalwart Mikaela Gerber. Luckily, it retains bar and beam goddess Peng-Peng Lee, whose petition for a sixth year of eligibility was granted due to multiple injured seasons. UCLA also gains another big freshman class, with two former elites and a variety of strengths. We’ll try to make sense of it all for you and predict the future, but head coach Valorie Kondos-Field seems to pride herself in being unpredictable.

Vault last season promised improvement in the fall, but almost none of the upgrades shown on social media materialized. Luckily, this year should have at least one 10.0 start value built into the freshman class with former German worlds team member Pauline Tratz competing a handspring pike half. Nia Dennis is also capable of more difficult vaults than the Yurchenko full, though her full in itself is easily worth putting onto the squad—and all the training updates so far are of her training just the 9.95 vault. Finally, Savannah Kooyman seems to be training an Omelianchik, though whether or not it will show up in competition is still up in the air.

As far as the veterans go, we only saw two Yurchenko one and a halfs make it to the competition floor last season: Gracie Kramer and Napualani Hall. Both have had their issues, but by nationals Hall had had hers clean enough to be the highest-scoring Bruin on the event. Meanwhile, Kramer had been taken out of the lineup altogether. However, so far this fall, both look poised to be main factors in the 2018 lineup. JaNay Honest and Felicia Hano are also looking to upgrade their fulls, though the viability of those is still doubtful. Other upgrade Snapchats we’ve seen seem to still feature Kyla Ross training an Omelianchik, but based on last season, we won’t believe it until we see it in a competition. The one full we can almost guarantee will be in the lineup is that of Sonya Meraz. Her consistency and dependability have been UCLA’s saving grace on more than a few occasions—a factor that earned her a scholarship for her senior season.

One important thing to consider with all these lineups right now is the status of Madison Kocian. Though she competed all around in her freshman year, she’s since had shoulder surgery and has only recently been allowed to start training out of her sling. If healthy, we’d expect her to compete in most, if not all, events, but for now she’ll stay an alternate on vault. Considering all these moving pieces, here’s how we’d lay out the vault squad for the Bruins. 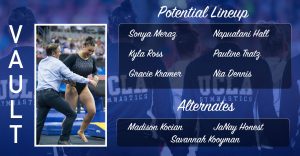 Bars was a strong suit for UCLA in 2017—and rightfully so. With two bars world medalists in Ross and Kocian and the difficult, clean set from Lee, it had a stacked squad that was almost impossible to top. This year, it’ll add Dennis and Tratz whose bars are very different but can both produce high scores. Dennis is cleaner and has great handstand positions and as good a toe point as she can get with taped ankles. Tratz is more dynamic with buckets of power and height on her release skills—though her Maloney can get a little funky on occasion. Most of the other freshmen unfortunately don’t meet the up to the level requirements, but there are a few to keep on your radar. Kooyman does meet requirements with her Maloney and pak, but bars is not her cleanest event, making it a bit unlikely she’ll make this stellar squad. In addition, walk-on Lilia Waller has been focused on updating her bar routine since finishing the 2017 J.O. season, training a Deltchev to bring her up to the level. She may not make the lineup as it stands now but watch for her to exhibition or compete in future seasons.

The veterans are a hugely talented bunch, but with Kocian and Savvidou out with arm-related injuries, there may be holes that need to be filled early on. We fully expect Ross and Lee to cap off the lineup with a great one-two punch. Honest and Meraz are also likely to contribute with their consistent 9.8+ performances, especially as they continue to clean up their form. Of those who didn’t compete last season, we’ve seen clips on Snapchat of Macy Toronjo training bars, and as she rebuilds her skill set after injury and time off, we would love to see her join the top six this year. Katelyn Ohashi also competed bars a few times in her freshman season, and we wouldn’t be surprised if she were to serve as an alternate if someone needed resting. Keeping all this in mind, here’s our proposed lineup for the Bruins’ bars this season. 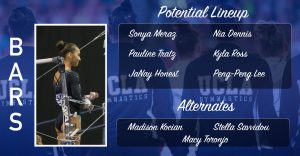 Beam was a huge event for UCLA last year, showcasing difficulty and finesse. Even the freshmen who count beam among their strengths may have trouble making the lineup. Dennis is a likely addition simply because of her scoring potential. In her nine routines during her final level 10 season, she only missed one routine, and every hit routine scored 9.575 or higher, which could easily translate to 9.85s in college competition. Kooyman is also capable of good scores and has a gorgeous, unique mount that seems like something Miss Val would love to showcase. But her inconsistency may keep her out for now. We also consider beam to be one of walk-on Sofia Gonzalez’s strongest events, and we’d love to see twice the amount of Gym-Max elegance, as she’s a former training mate of Ross.

Expect the lineup to be bolstered by the veterans, though. Kocian has been seen on beam already, despite having surgery at the end of the summer, which might be indication that she’s working on a Bluetooth-style routine that would allow her to return to this lineup sooner than any other. We also fully expect Ross, Lee and Ohashi to make up the second half of the lineup, considering they all received perfect 10.0s on the event last season. With the ever-solid lead-off Gerber gone, the Bruins are going to need a new steady rock, and Meraz is likely the person for the job. Despite only competing beam a few times last season, oftentimes being added last-minute, she hit 9.75 or higher five out of six routines and never came off the apparatus.

Unfortunately, that covers all the returning beamers for the Bruins. However, there are definitely a few that didn’t compete last year that we’ve seen training or in exhibitions that could be strong candidates for alternate positions this year. Toronjo has shown lots of promise on Snapchat, Mercedes Sanchez exhibitioned a time or two last season and, though they were injured last season, both Anna and Grace Glenn had stellar beam sets and have been seen training beam on social media as well. Here’s who we’d go with for the UCLA beam team in 2018. 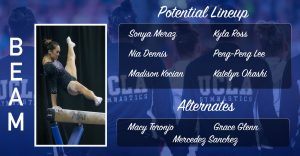 Floor had its ups and downs last season. Many of the gymnasts UCLA put up on floor had issues with stamina, crashing or coming in short on their final passes. Tratz and Dennis should be able to help with that, as they’re used to performing four passes, making three less of a burden. Tratz even competed a full floor routine as recently as August at the Summer Universiade in Taipei. We could absolutely see her joining the lineup, especially if Miss val is able to pull the personality out of her as she has done with so many others in the past. Both Dennis and Tratz also have E passes, so that’ll be a nice boost for UCLA to keep up with the increase in difficulty across the country. Floor was one of Kooyman’s and fellow freshman Kendal Poston’s best events in level 10, so if either of them can continue that trend, they might be good alternate choices this year.

The veterans are going to be tough to overtake though, as they look to be training upgrades and stamina day in and day out. Honest has been seen training a full-in and a double arabian on Snapchat, and Toronjo has also been seen trying her double layout again. Hano had a double layout last year and Kramer had a front double full, meaning UCLA would be capable of fielding E passes in all six routines. But take it all with a grain of salt. Remember how many of those upgrades from last year made it to the actual routine? Hano and Kramer both had various issues on floor—the former with not enough stamina and the latter with too much power—so there are issues that need fixing before they can think about sliding into the top six. Ohashi seems to be the only one who didn’t have any issues last year, hitting every routine, so she could be a strong lead-off performer to set the rest of the lineup up for success.

Ross also contributed on floor last season, but only hit two of her four appearances. However, those were at the end of the year, so she could have figured things out. Until we see proof, though, we’re likely leaving her as an alternate, just to make sure she can do her best work on the other three events. Meraz didn’t seem to lack stamina, but she did crash on one of her five floor outings last year. And with so many strong competitors, she may not make the top six.

Kocian and Savvidou were also important floor contributors last season as both broke the 9.9 mark at least once. But with their injuries, floor may be difficult for them to return to right away, so we have them as alternates for now. With so many options, it was difficult to choose, but below are our choices for the Bruins’ floor lineup this year. 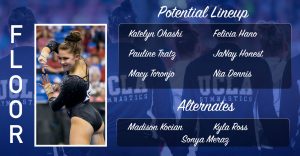 UCLA rotates through its lineups so much that it often doesn’t field an all around gymnast. But this year we fully expect Dennis to compete all four on the regular. Her scoring potential and consistency are too high for her not to, though we can see her being rested or rotated through on beam. Kocian was a regular all arounder last season, but with her injury, she likely won’t debut on more than beam until mid-to-late season at best. Ross made the all around when she competed floor, but it seems that may have been too much for her on occasion, which is why we’re keeping her on her top three for now. Hopefully she’ll get her endurance figured out and is able to become a more consistent floor performer in her sophomore campaign. Meraz may also be in contention for the all around, depending on if she is used on floor at all, as she’s almost always a dependable choice.

One great thing about UCLA’s huge roster is its great depth, and that may be its saving grace in restabilizing the team’s performance in the coming season. With all the upgrades in the works and the solid class of freshmen coming in, the Bruins look to be in a strong position to rise to the top once more.