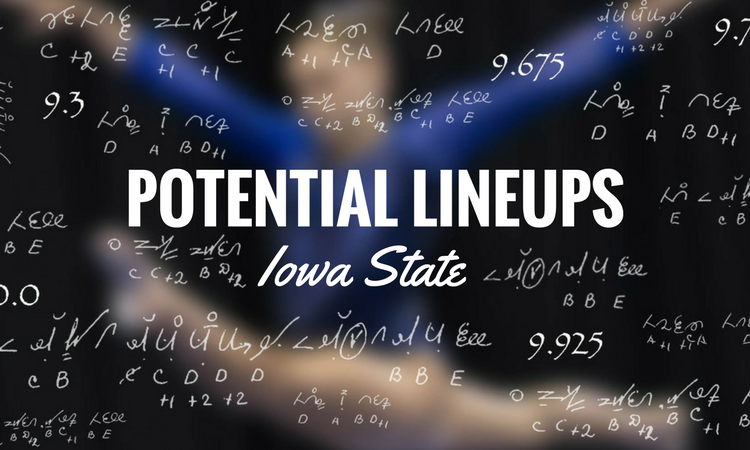 We return to the Big 12 today to feature the Iowa State Cyclones in our next lineup analysis. With no graduating seniors and a class of stellar incoming freshmen, ISU is likely to be another team on the rise this year, looking to improve upon its No. 29 finish where it snuck into regionals with very little breathing room. With more talent and more practice time, the Cyclones could be able to return to regionals by more than just the skin of their teeth.

Vault was actually the Cyclones’ best event last season, despite often having lower scores in the first half of the lineup. In the past, Iowa State’s vault squad has consisted of almost all Yurchenko fulls, anchored by the handspring pike half from Meaghan Sievers. But no more: freshman Sophia Steinmeyer has a strong Yurchenko one and a half that should easily score 9.8+ each week, provided it looks like it did in J.O. competition. Ariana Orrego will also join the team with her high Yurchenko full, which is definitely clean enough to make the top six, as some of the veterans’ fulls are a little messier. Orrego made history last summer in Rio when she became the first ever Peruvian Olympic gymnast. She has quite the pedigree for a middle-of-the-road team like Iowa State, so maybe her arrival will signal an upward movement for her new team as a whole.

A number of the veterans, though, will be looking to continue competing the all around and thus will require a berth in the vault lineup. Kelsey Paz, Haylee Young and the aforementioned Sievers were all competing all four events by the end of last season, so it’s quite likely they be in each lineup. Paz’s vault is fairly consistent, albeit lower scoring, typically hovering around 9.7-9.75. Young, despite only competing a full, is capable of 9.9s on vault, a score she achieved with a steady, consistent climb throughout the regular season. Sievers’s 10.0 start is typically the highest scorer of the squad. Her season high in 2017 was a 9.925, so it’s a pretty safe bet to say she’ll be back and will likely continue to anchor. Sydney Converse, Madeline Johnson, Briana Ledesma, Kelly Martin and Courtney Middelkoop all also vault the Yurchenko full, but most of their scores have stayed lower than typically desired. Converse is probably the strongest of these, should she be fully recovered from the injury she sustained last year. She competed vault in the last three meets of the season, which is a good indication that she’ll be back on the event more often in 2018. In her freshman season, she didn’t miss a single vault lineup, so returning to it once healthy seems a likely outcome. With all these in mind, here’s how we’d lay out the vault lineup for ISU this season. 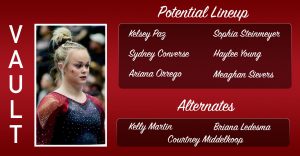 The Cyclones had kind of a rough go of it on bars last season, with lots of inconsistencies and just generally lower-scoring routines. Freshmen Orrego and Steinmeyer bring options to the table to change the game up a little. Orrego’s Olympic test event routine shows a few form breaks, particularly in her bail to handstand, but with a simplified and shortened routine we think she could be a huge asset to the bars team. Steinmeyer is rougher around the edges and sometimes has a hard time keeping her hips square with the bar on her overshoot to ensure her legs don’t fly all over the place. However, her piked Jaeger is really dynamic, and she has quite the natural swing. With a little bit of cleaning, she could definitely find herself stepping into the lineup once some of the all arounders need resting.

But again, thanks to their all arounders, spots in the bar lineup will likely be limited. Paz, Young and Sievers all competed bars regularly last year with varying rates of success. Paz and Young probably consider bars to be one of their weaker events, as it was often their lowest-scoring. Sievers, on the other hand, would likely count bars as one of her strengths, as it was her second-highest-scoring piece each time she competed the all around. All three are strong candidates for the lineup due to their AA potential, but Sievers in particular would be a good choice for a late lineup slot. Johnson, Ledesma, Hilary Green and Laura Burns also competed bars last season, with Green showing the most consistency of the four and Ledesma the highest score ceiling. Ledesma was actually the only Cyclone on bars to reach the 9.9 mark, making a strong case for her to slide into the anchor position. Take a look below at how we’d fill out the rest of Iowa State’s bars lineup. 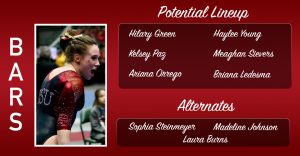 Beam had some extreme highs and lows for the team last season, ranging from a 49.425 to a 48.0 team score in the span of just six weeks. But it’s not a totally dire situation. Though somewhat inconsistent, ISU has a good group of beamers to draw from, both old and new. Orrego and Steinmeyer both have solid routines, with Orrego’s perhaps the stronger of the two, especially if she downgrades from her elite routine. Steinmeyer has great confidence in her beam choreography but will often wobble on her acro and still has some shorter split positions that she could work on.

Of the veterans, the clear favorite on beam is Young. With a top score of 9.925 and only falling once all season, she’s almost a lock for the anchor position once again. Paz is a fairly steady competitor, only showing her nerves when the pressure is higher than normal (like at regionals), so for the most part, she ought to make a good lead-off performer. Sievers isn’t much of a beamer, but her totals are passable. She scores pretty evenly with the best of the non-all arounders, so it’s likely she’ll stay in the top six even if she has one of the weaker routines. One gymnast who hasn’t been discussed yet is Casandra Diaz who competed beam and floor in her freshman year last year. Though she started out shaky, she peaked midseason at a 9.9—higher than anyone else on the team save Young—which could make her very much worth the risk of inconsistency. Converse also has a confident and steady style, as well as some decent difficulty, particularly in her dance skills. So now that she’s had the summer to fully heal from her injury, she should hopefully be back up to her true scoring ability again. Freshman Molly Russ is another name we haven’t really discussed, but she hit five of six beam routines last season and stayed mostly in the 9.7s, a range that could potentially move in her into Sievers’s spot. She hasn’t competed regularly though, and she’s still a bit wobbly in places, leaving her status as a bit uncertain.

One more name to throw into the mix is Emily White. While she didn’t compete at all last season due to a leg injury, she did exhibition beam (with a heavy brace) at least once. And that routine was a true work of art. Strong, confident choreography matched with long, fluid lines and excellent flexibility make her artistry so dynamic, and she shows the ability to make last-minute corrections like a veteran beyond her years. But if our hearts had their way, White would absolutely be in our competitive set. However, we still don’t know her health status and whether or not she is 100 percent recovered. Here’s who we think will make the Cyclones’ best beam squad in 2018. 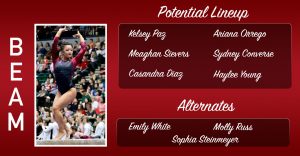 Once the team finally hit its stride, floor proved to be a strong event for the Cyclones. Orrego should be expected to add to that strength, bringing a nice full-in, raising the team’s E pass count up to two. Her lovely, dramatic lines and excellent musicality should create a refreshing change of pace to the lineup. The third and final freshman of the class, Annie Johnson, also has some excellent musicality on floor, with great body control and flexibility, as well as some solid—albeit simple—tumbling.

As on beam, Young is the clear favorite because of her power and energy on floor. Her high full-in and sassy choreography earned her 9.9s on the regular last year, making her one of the most consistent and the highest-scoring Cyclone on floor. Sievers and Paz should also be in the mix, with Paz the higher scorer but Sievers the more dynamic performer between the two. Ledesma, believe it or not, had a higher ceiling than Young in 2017, scoring a 9.925 in just the second meet of the 2017 season. However, her performance level doesn’t touch Young’s, and her high scores definitely fluctuated more often than not. She’s a good choice for the lineup, but Young is likely the better anchor option. Middelkoop and Diaz also make decent cases for themselves, with Middelkoop the more likely of the two. She’s one of the most engaging performers on the team and has a huge double pike to kick off her routine.

With all these factors in play, here’s a look at our proposed floor squad for the coming season at ISU. 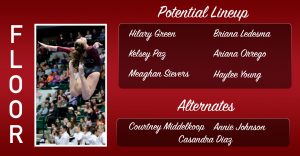 Using our proposed lineups, the Cyclones might actually have four gymnasts in the all around on a regular basis, using a Florida-like strategy, which is unusual for a lower-ranked team like ISU. Young, Sievers, Paz and Orrego all make great cases for themselves on all four, and while each definitely has their weaknesses, they’re all capable of big scores on almost every event. It will be interesting to see if Sievers continues competing AA or if she drops back to being a two- or three-event gymnast to start the season. It will likely be based on her performance against some of her teammates on beam and floor, but there’s also a previous ankle injury to be concerned about. That definitely could keep her off of floor if it’s acting up enough to make her unable to train her tumbling on a regular basis. Paz’s inconsistencies, particularly on bars, could take her out of the running as well, especially if someone like Steinmeyer can clean up those small details and show a better hit percentage. Orrego’s chances at the all around may be limited simply due to being a freshman and wanting to give the upperclassmen first dibs, but if you compare routines side by side, we think she definitely has a shot at beating out some of the more veteran gymnasts for lineup slots.

Check back soon for our analysis of Minnesota! And to see all the posts in the potential lineups series, click here. 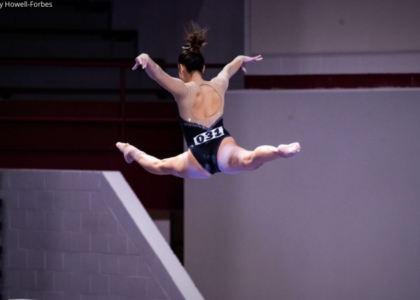 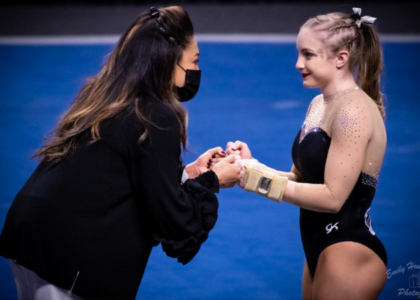 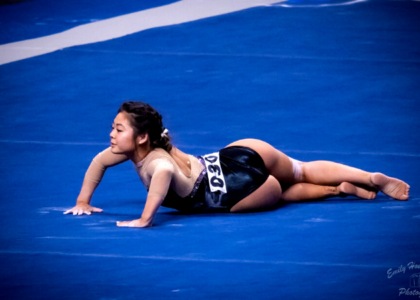