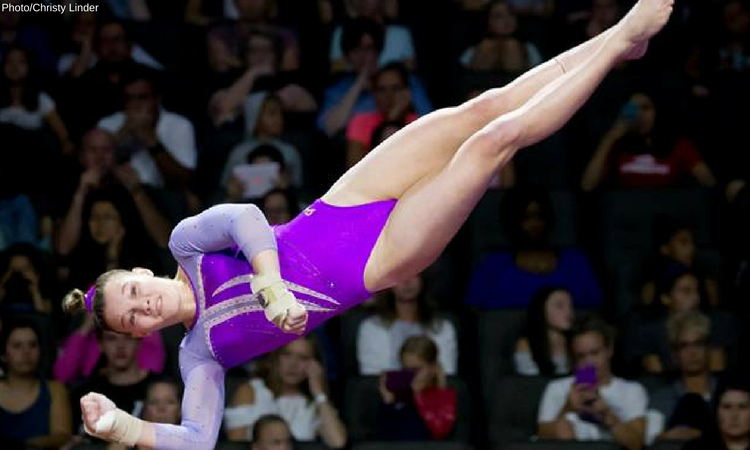 The P&G Championships kick off this week in Anaheim, Calif., where a new champion will be crowned after four years of Simone Biles dominating the event. The American elite landscape is even less predictable than usual this year, and it’s going to be a thrilling weekend watching how everything comes together.

Thirty gymnasts on the roster have already committed to their future college team. Florida and UCLA top the rankings, with five commits each while Alabama, Georgia and Utah each have three. 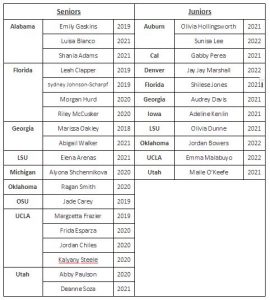 In the senior field, the buzz will be all about the world championship team. With only four spots, and three athletes allowed to compete per apparatus, who will be selected?

Most projected teams heading into the championships feature American Cup champion Ragan Smith. The 17-year-old Oklahoma commit seems like the most likely champion, with difficulty and consistency on all four events and more international experience than any other senior in the field, aside from perhaps Ashton Locklear.

From there down, the field is quite competitive. New seniors Morgan Hurd (Florida 2020) and Jordan Chiles (UCLA 2020)  had a few struggles at the U.S. Classic but showed that they have the skills to contend on their best days. Another Florida commit, Riley McCusker, had to fight through an injury and a rough meet the last time we saw her, but she’s already shown competitiveness internationally and even one good day at nationals would put her back in the equation. Alyona Shchennikova (Michigan 2020) and Abby Paulson (Utah 2020)  haven’t been thought of as frontrunners until recently but both had great days at the classic and could make a case for worlds if they continue in the same direction. And don’t forget Victoria Nguyen, who withdrew from the classic for an ambiguous reason but who has already had an international assignment this year.

The most likely configuration for a worlds team is two all-arounders and two specialists, and it’s increasingly likely that one specialist spot will belong to Oregon State commit Jade Carey. If she continues to land her Amanar and full-twisting Kasamatsu she could make the team on that alone. However, her difficult routines on beam and floor both also scored well at the classic and could be competitive internationally. The question for Carey is whether she can handle the pressure of nationals and the intense selection camp in her first elite season.

Olympic alternate Ashton Locklear is perhaps the default pick for the bars and beam spot due to her extensive experience—she’s the only female gymnast in the field to have competed at worlds. However, last time we saw her compete bars, she was beaten by McCusker. If she can’t dominate her signature event this weekend, the spot could plausibility go to any number of all arounders who are stronger on these events. Shchennikova, McCusker, Hurd or Nguyen could steal the show on bars and beam and emerge as a contender.

In the junior competition, it’s hard to forget the stunning performance that UCLA commit Emma Malabuyo put on a few weeks ago to run away with the title at the U.S. Classic. If she can repeat those routines at nationals, she’ll have the chance of adding another title to her collection. However, if things don’t go so smoothly, expect her fellow Junior National Team peers to take advantage. Maile O’Keefe (Utah 2021) showed her grit at the classic to get second even on a rare off day, and when Sunisa Lee (Auburn 2022)  and Adeline Kenlin (Iowa 2021) are back in the all around, they won’t be far behind.

Make sure to keep an eye out for Cal commit Gabby Perea, who is just returning from an ankle injury but easily won bars even with only a flyaway dismount a few weeks ago. While she’s expected to only compete bars once again, the routine is still one you don’t want to miss.

There are a number of gymnasts in the field who might be left out of conversations about medals and worlds teams but who seem set for collegiate stardom within the next few years.

UCLA habitually recruits to its weaknesses, and its vault lineup will be well served by the 2020 freshman cohort; Jordan Chiles’ Amanar is joined by two comfortable double-twisting Yurchenkos from Frida Esparza and Kalyany Steele.

Junior gymnast Audrey Davis of Georgia’s 2021 class exudes WOGA technique in every movement, but atypically for her gym, she’s strongest on the leg events, making her an exciting prospect for the Gymdogs when she finally arrives on campus. It’s also fascinating to see Marissa Oakley’s form only a few months ahead of her collegiate debut in Athens, as she will join the team after competing at the championships this weekend.

Denver commit Jay Jay Marshall might not yet have the consistency for a medal run in the junior field, but she certainly has the skills and the style. Her sheer talent will be a highlight of the meet regardless of her results.

Sydney Johnson-Scharpf might have come a little too late to this elite season after a struggle with pneumonia limited her competition at the classic. However, we know her well enough now to look forward to the class and performance quality that we’re sure will make her a star at Florida.

Our revelation from the classic was Luisa Blanco, a new elite from WOGA who recently committed to Alabama. Her difficulty is lower than much of the field, but her execution and composure on all four events is breathtaking. Plus, she’s still got some time before she heads over to Tuscaloosa for college.

Women’s podium training will take place in the afternoon on Wednesday, with juniors starting at 5:30 p.m. ET and seniors at 8 p.m. ET. It will be streamed on USA Gymnastics’ Youtube.

The competition will take place over two days, with separate sessions for junior and senior athletes. The schedule is as follows:

Start lists are available here. Please note that not all gymnasts will compete all events; some do not compete all around and others qualified to nationals in only two or three events. The live scoring can be found here—make sure to monitor it for last-minute scratches.

NCAA Gym News will be covering podium training and the competition throughout the week. Be sure to check the site and follow us on Twitter to keep up with the latest!