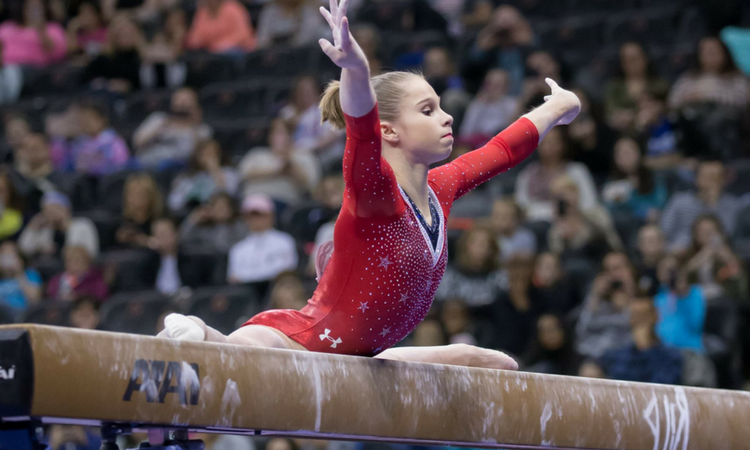 Finally, the American elite season is upon us! Today, the gymnasts competing at the 2017 U.S. Classic had podium training in preparation for tomorrow’s competition, and many of them are future NCAA gymnasts. Here’s some of the highlights we loved that you should keep an eye out for during the competition.

Holy difficulty, Batman! Lee’s routine is packed with skill after skill, opening with a huge connection: Nabieva, pak salto, toe-on to handstand, Maloney, inbar Gienger! She earns 0.3 in connection value just with that, and the Nabieva is one of the hardest release elements on bars, rated at a G. The beautiful thing about all this difficulty is that she seems to be hitting it all comfortably; none of it looks uncertain or scary. And her lines are typically quite lovely, too—though her legs did get a little messy here and there. This should be a huge routine for her, and her bars prowess will certainly be appreciated by Auburn when she gets there.

It remains to be seen what events McCusker will compete. She trained all four but has stated in an interview that she won’t compete all around. Whether or not her injuries allow her to compete floor, this routine is a fun one! Her dance through here really showcases her long lines and lovely toe point (and controlled wolf turn!), and her music is “This is Halloween” from the Tim Burton classic Nightmare Before Christmas. While she may wait to compete the event until nationals to nurse her injuries, this is definitely a routine to look out for.

Most of the gymternet has heard about her already, but if you haven’t, Jay Jay (or Jaymes or JJ) Marshall is the teeny tiny girl with a huge vault. She landed an Amanar at J.O. nationals last year and is now pursuing her elite goals. Her DTY was massive on the podium, so keep an eye out for her among the junior ranks tomorrow.

In her first competition since 2014, Oakley is making her swan song to elite gymnastics here at Classic (and maybe nationals?) before she heads to Georgia for the 2018 season. Of her work on the podium, her bars showed the most promise, with a pak salto, Chow, Gienger connection and a Fabrichnova dismount. It’ll be interesting to see what the rest of her sets look like, but regardless, she’ll be a great asset to the Gymdogs this year.

For anyone who saw junior nationals last year, this is a given. Maile O’Keefe was one of the few steady rocks among the junior ranks, delivering solid gymnastics routine after routine to win the title. Beam is where she shows some of her most impressive work, such as this difficult and unique side aerial, layout stepout, layout stepout series shown in her podium training video. Utah will love to add that to the lineup when she arrives, but until then, she definitely leads the pack on the junior national team.

After getting tragically injured just before nationals last year, Chiles looks ready to jump back into action and throw some new skills. Her Dos Santos looks excellent, and it sounds like her DTY is just as, if not more powerful, than before her injury. She also seems to be prepping to throw her Amanar again, if not at Classics, then at nationals in a few short weeks. A good vaulter is exactly what UCLA could use right about now, though they’ll have to wait a few years for Chiles. In the meantime, a solid performance here could be the first step to putting her elite career back on track.

After a severely inconsistent meet at nationals last year, Soza has changed gyms and reworked some things. And it seems at least that her bars are stronger for it. She seems to have better control, and the risks she’s taking are more calculated. Keep an eye out to see if that effect is true on her other pieces. Reportedly, she was crashing DTYs and fell off beam at least once. Hopefully, it’s just a bad rehearsal for a good show, and she can put together clean sets.

Famous for climbing to elite after transitioning from cheerleading only three years ago, Madsen was throwing some crazy skills at podium training today for being so green. Beam saw her tossing baranis and a scorpion turn, while her bars set includes fan favorite German giants. Though she isn’t the cleanest gymnast, her unique skills will certainly make her a treat to watch and may catch the eye of some college recruiters as she is still currently uncommitted to a school.

Being the most experienced senior competitor in the field apart from perhaps Ashton Locklear, Smith was always going to be one to watch at any meet this season, considered by many to be a favorite for the world team. She’s gotten a few upgrades on bars, including a Downie and a Ricna to pak combination, and she also seems to be planning to unveil a new floor routine this season, though that won’t be until nationals at the earliest. It’ll be “a little more sassy than last year,” she says, which is a great direction for both her worlds’ bid and her upcoming career as a Sooner.

The question buzzing around Carey today had to be, is the hype for real? The community has been buzzing about Jade Carey since her appearance at camp earlier this year, saying she could be the next Kayla Williams—coming out of nowhere and winning a world vault title. She has an Amanar and a tsuk double full, which could mean a very competitive D-score for vault finals if given the chance to travel to Montreal. The question is whether or not her showings between now and the world selection camp are strong enough to merit a place. Unfortunately, that question was not answered today, as she was only seen doing timers, no meet-ready vaults. However, she is definitely one to keep your eye on, really on all three of her events, throughout tomorrow’s competition.