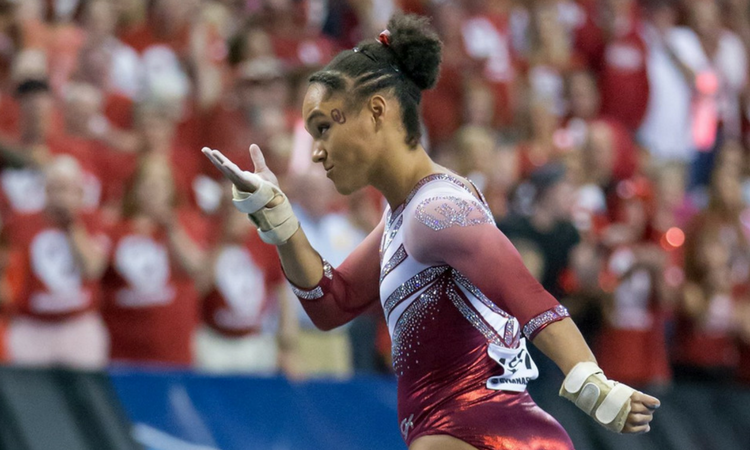 We all love seeing the former elites compete in NCAA. We also wishfully wonder about elites that we never got to see. Sometimes though, we wonder what might have been if some of our favorite NCAA stars had ever competed elite. Whether it be for the difficulty they’ve shown, their impeccable form or their incredible performance quality, we wish we had gotten to see these 10 gymnasts in elite.

McMurtry is the prime example of these wishes. With the gorgeous double twisting Yurchenko and her triple twist on floor, we all imagine what might have been if she had even competed as an elite. Sadly, both her training and competition have been severely limited by injuries and we will have to be content enough with one more year of watching her in NCAA and wondering what might have been.

Gnat competed AA several times throughout the season and competed vault, beam and floor in every meet. With huge difficulty on both floor and vault, as well as a consistent beam routine, she regularly posted scores of 9.9 or higher for the Tigers. Even though we knew that Gnat always had the difficulty on all her events, it didn’t really hit us what could have been had she competed elite until she posted this video of her landing an Amanar on her way to retirement. It was a very “But… wait. Huh? Come back! Are you free for Worlds this year?” moment.

Chayse’s clean, consistent gymnastics was a staple in Oklahoma’s lineups throughout her career, eventually breaking into the AA in her junior season. She notched a 10 on beam this season and was consistently in the 9.9 range on every event. Her dance background gives her amazing artistry on both beam and floor, something that we would love to see more often in elite. Her routines would have been a breath of fresh air on both events. We love her consistency across all four, and her ability to flair and stick a vault is uncanny. She trained various upgrades while at Oklahoma, such as a yurchenko 1.5, which we never saw in competition, and she brought a double layout on floor on multiple occasions. We would love to have seen what she could have done in elite with innovative connections on her signature events. We’re sure she would have brought us something amazing, clean and creative.

Nicole Artz was a rock for Michigan, notching a 10 on floor this season—the Wolverines’ first since 2014. Artz throws big skills, especially on floor, such as a stellar piked full-in, but her true strength is in her consistency, calm demeanor and performance quality. With a little more difficulty on the other three events, she would’ve been an elite standout for her poise and uncanny ability to hit.

This Sooner definitely has the skills to have made a run at elite, at least on vault and floor. Her Yurchenko one and a half is simple for her, and she could easily upgrade to something harder, while she has a plethora of variety she can bring out on floor from full-ins to twists and turns. While bars and beam aren’t quite up there with the other two events, she would still be a pretty baller power-event specialist if she wanted.

Karr was a standout freshman at Denver this year and was a rock in the all around every meet, scoring a season high of 39.675. She shines the most on vault, where she competed a yurchenko one and a half and even receiving a 10 on the event on one occasion. Her tumbling is clean and powerful, featuring a sky-high double pike that could easily be twisted or upgraded to a double layout. Her beam features unique connections such as a side aerial to a back handspring stepout and a hitch kick to a side somi, making her a joy to watch on the event. Her clean execution combined with her unique skillset would make her a joy to watch in elite, and with some upgrades, she could be a spectacular one. Hailing from Twin City Twisters, she certainly could have chosen to go down the elite path, but we’re glad that she at least chose to do college gymnastics.

Korth was a superstar freshman for Kentucky this year, bringing home the SEC Freshman of the Year for the Wildcats. She competed in the all around in every meet and scored a 39.45 as an individual at nationals. Korth brings big skills, like a piked full in and full-twisting double layout off bars, and she’s currently training a double-twisting Yurchenko. Maybe more importantly, she performs all of that difficulty with great execution, and it would have been a thrill to watch her compete at the elite level.

Childers was a J.O. favorite for many of us and brings incredible artistry and performance quality to her floor and beam routines. As a freshman at Alabama, she was a frequent member of the beam rotation and was added to the floor lineup later in the season. With a little bit of added difficulty and a few more connections in her beam routine, we believe she would have quickly become a favorite among the elite crowds.

McMillan was a star for Oregon State during her time in Corvallis. Not only was she a standout on bars, scoring a 10 during her senior season, she also brought innovative skills to her routines on both beam and floor. With what seems like more variety in routines at the elite level, McMillan’s front handspring to knee, backspin and other quirky skills would fit right in. Plus, her form, consistency and four-even prowess would set her apart from the rest.

If only for her vault and floor, Preston has the power to have made a run on the elite stage. While she only competes a full-twisting Yurchenko, the skill is so floaty and perfect than adding another twist would have been no problem for this Bruin. As for floor, her tumbling is just as weightless, and her jumps seemingly effortless. Pair that with her sultry Miss Val choreography and we’ve got a fantastic elite routine in the making.