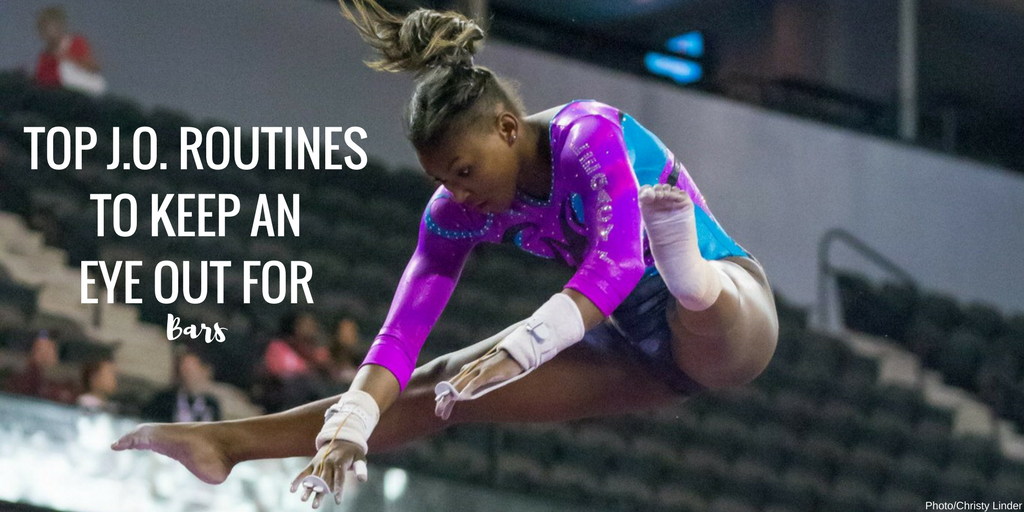 We’re back today with the top 10 bar routines from the incoming freshmen. Putting up six consistent high scoring routines can be a struggle for many teams. These freshmen routines have scored consistently well and several are headed to schools that struggled on bars in 2017. Because the requirements for J.O. are different than those in NCAA, there are a few routines that will need to be upgraded or reconstructed to be considered “up to level” in NCAA.

​Watson’s clean lines translate well to bars, and her routine contains a Ray that she gets good height on. She may need to upgrade her dismount or add a connection to it for NCAA, but it looks possible with some adjustment of her routine composition.

​Bonsall has nice rhythm to her bars and is very quick and clean. However, with no single bar release and just a Maloney and a pak salto for her releases, she will also need to upgrade for college.

​George’s routine could be slotted into Cal’s lineup as is and with a little polishing on her handstands, should score very well next year.

​There are a few built in deductions in Brown’s routine, such as small leg separations and handstand positions. However, it’s an overall strong set with good difficulty and should score well for the Pioneers.

​Laird has competed both for Canada and as a level 10 in the U.S. and has gorgeous lines on this event. Every handstand is hit perfectly and the set contains both a Ray and double layout dismount.

​Dennis gets incredible height on her release moves and has scored well all season despite having ankles so tightly taped she can barely point her feet. She excelled on bars during her elite career as well, showing both gorgeous lines along with high difficulty. Her gym, Legacy Elite is also known for producing top bar workers.

​Navarro’s routine isn’t big or flashy, but it is clean and includes a nice Shaposhnikova and Tkatchev. In addition, she has a gorgeous toe point throughout the routine.

​Leonard-Baker’s bar routine is gorgeous and has five different release moves, which is rare in a J.O. routine. No upgrades will be necessary for this routine to be up to level in NCAA.  In particular, her toe on release to high bar is done in pike, which adds a bit of uniqueness to the set.

​Roby’s routine is lovely with a high piked Jaeger. But the true highlight is her completely straight body double layout dismount (think former Gymdog Grace Taylor). Nebraska lost one of its top bars workers when Laeng graduated, and this routine should slide right into that spot and receive good scores.

​This is a routine that will be interesting to watch to see how it does next year as BYU is a lower-ranked team and often doesn’t get the truly high scores when it comes to stellar routines. Nevertheless, it should see lineup time on a regular basis and boost BYU’s scores.
Facebook0Tweet0Pin0