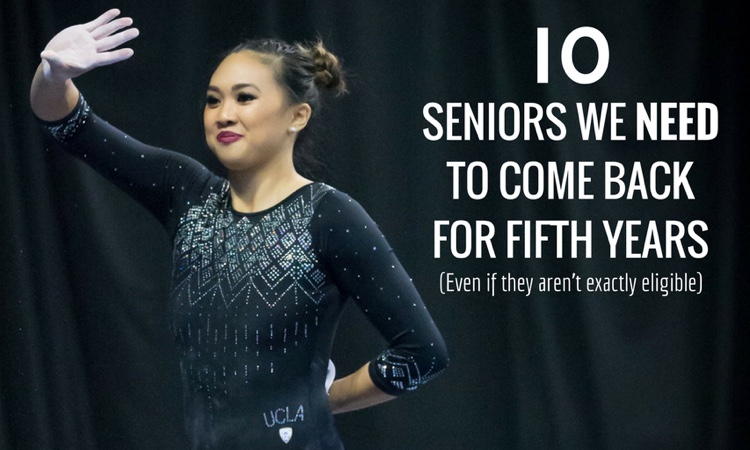 The season is over, which means most of our favorite seniors will be graduating and moving on to the non-gymnastics part of their lives. However, we just can’t let go. While some have potential fifth years begging to be used, others don’t. But that’s not stopping us from wishing they could come back for just one more year! In no particular order, these 10 seniors are some we NEED to come back for fifth years (even if they’re not technically eligible to do so).

Chayse Capps, Oklahoma
Why does one of the best dancers in the NCAA have to leave us already? Capps’s presence, originality and intensity on floor has been unmatched over the last four years, and her floor routines were always one of the most anticipated ones. On top of that, Capps was also undoubtedly the beam queen, moving on the apparatus flawlessly and always with grace. Every time Oklahoma moved to beam, you could always relax and just enjoy the show, and Capps was just the cherry on top.

Talia Chiarelli, Michigan
Seriously, who else is ever going to do beam to Iggy Azalea again? We need Chiarelli back for her entertainment value, the incredible tumbling she showcased, and her unrelenting spirit. It’s really a shame Michigan never made it to the Super Six during her time there, and her loss will likely make it harder. A fifth year could solve that!

Brianna Comport, Bridgeport
Comport became a sensation during her senior year for Bridgeport on beam and floor, and all we can say is: “where has she been all our lives?” and “thank goodness she decided to walk on to the team!” Her potential started during her junior year, but her senior season was really her best ever. We didn’t get to enjoy her gymnastics enough, and she seriously needs to come back to make it to NCAAs as an individual. With a plethora of 9.9+ scores throughout the season on both events, she definitely could have held her own among the D-I gymnasts.

Ashleigh Gnat, LSU
We have GOT to see that Amanar in the NCAA. (We can dream, right??) But besides that, LSU is going to sorely miss her routines in 2018—a near guaranteed 9.95+ on three events is extremely hard to come by and even more difficult to replicate with incoming freshmen.

Ashley Lambert, Nebraska
The world needs more death drops and defying expectations. Plus, her floor routine at nationals was by far the most entertaining. More of that in 2018 please! But if we can’t get Lambert back for one more year, can she at least choreograph some routines on the side?

Peng-Peng Lee, UCLA
While this is a possibility that might actually happen, it’s a rare case for a gymnast to get a sixth-year. However, that doesn’t mean we can give up hope. Yeah, ending your career with a perfect 10 on beam at the national championships—your first perfect 10 on the event—if what every gymnast dreams about. But why settle for one 10 when you could come back and get a whole plethora of them next season? And that’s before we even talk about the chance at a UCLA team championship.

Kaytianna McMillan, Oregon State
McMillan finally came into her own at the end of the 2017 season, scoring a perfect 10 on bars, winning the Pac-12 Gymnast of the Year award and being nominated for the AAI award. We can only imagine what one more year could do for her gymnastics, not to mention the Beavers!

Majesta Valentine, West Chester
Valentine has been making history for West Chester throughout her career by becoming the first to ever qualify to the NCAA Regional Championships during her sophomore year. She went to do it two more times, as a junior and again this year as a senior. This season during regionals, she came SO close to qualifying to nationals that all our hearts broke, and we are now  demanding a fifth year stat. Seriously, she missed a spot by .05. Not fair, gym gods, not fair. She still went on to become an individual champion at the USAG National Championship, but who doesn’t love to see the smaller schools represented at NCAAs, especially DII ones? We certainly do!

Aja Sims, Alabama
Sims has been a powerhouse of personality and technique throughout her time at Alabama, and the sass and grace her routines have always carried will be sorely missed. A fifth year for her would mean more fabulous floor choreography and perfect poise on beam, but if we can’t have that, can she actually do a clinic for the entire NCAA on the 180° degree split?

Zoe Draghi, California
Much like Capps, a fifth year of Draghi would mean more of the most exciting and unique floor and beam work in the nation. Her dance training and distinct style brought a new atmosphere to Cal’s lineups that likely will never be duplicated. Add to that her dependability in the face of adversity – she’s only fallen five times on beam in her career and hasn’t missed a single floor routine – and it’s plain to see how much she’ll be missed at Cal.