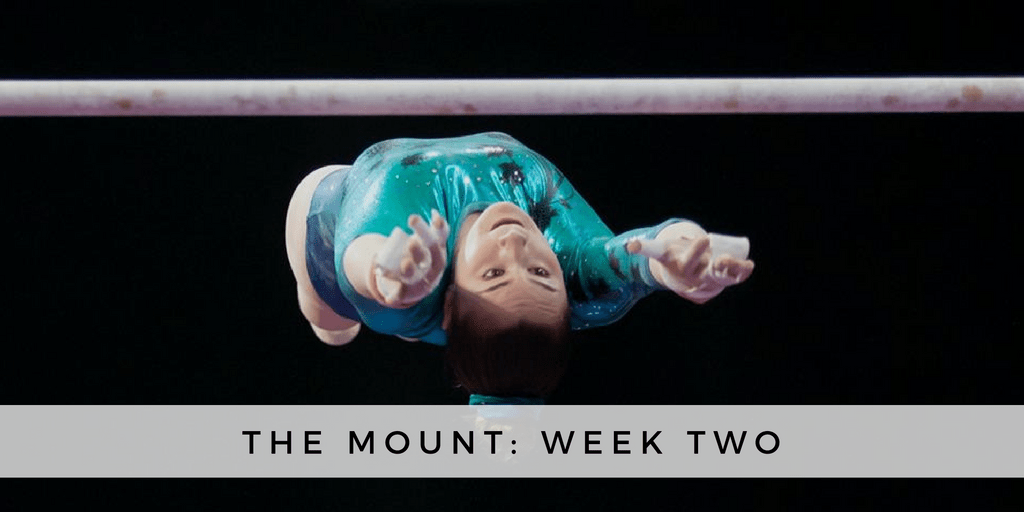 Week two gets underway Friday with even more exciting matchups. Washington, Boise State, Nebraska and others will kickoff their seasons, including some highly anticipated freshmen the likes of Madison Copiak, Courtney McGregor and Taylor Houchin. We’ll also see teams trying to either redeem themselves from week one, like Georgia, or keep the success going to prove week one wasn’t a fluke, like LSU and Oklahoma. And like always, we’ll give you and update on injured gymnasts, provide previews and our opinions on the outcomes of top meets, identify the teams on byes and those competing twice and provide every score and video link you could need to follow along.
Injury Report
Each week an injury report will be included in The Mount to keep you up to date on gymnasts who are out of action and those that are expected back from injury. Note that this is not an exhaustive list, and if you know of anyone that’s hurt not listed here, let us know and we’ll add them! View a full rundown here.Out or Questionable for Week 2 Action
Top Matchups
Georgia at No. 13 Auburn: Friday, Jan. 13 at 7 p.m.
Georgia Preview | Auburn Preview

This matchup is normally a pretty close one, and it should still be one most likely as both teams had their issues the first week of competition. Auburn was all over the place on floor while Georgia has more than a beam-plosion. So this meet will either be about fixing those mistakes or seeing which team is the least disastrous. The Tigers’ mistakes on floor appear to be more easily fixed, however. While Georgia showed a lack of confidence that spread to more events than just beam. But the Gymdogs are already working to remedy the issues, inviting in legendary head coach Suzanne Yoculan to give a pep talk to the team and appearing more confident in training on Snapchat. Auburn is also looking improved. So the real question will be which team is more motivated to put week one behind itself and show the type of gymnastics it is capable of.

No. 30 @ugagymnastics takes on No. 13 @auburngym in a battle for the SEC night session Friday at 7 p.m. ET. Who wins? #NCAAgym

This matchup is one to watch. Alabama faces its second tough opponent in a row, but this time it’s at home, which should give the Crimson Tide something to be hopeful about as the team is very tough to beat in Coleman Coliseum. But LSU is coming in after a stellar first week of competition that put it right on top of the standings with a near-198 team total. While Alabama is still fine-tuning landings and other little details, LSU looks to be more in midseason form — something that could be the difference maker Friday night.​

Tough matchup between No. 1 @lsugym and No. 4 @bamagymnastics Friday at 8:30 p.m. ET! Who goes home with the W? #NCAAgym

Another good matchup is set for Sunday afternoon. It’ll be the battle of the former elites as Kyla Ross, Madison Kocian and the Bruins take on Maggie Nichols, Brenna Dowell and the Sooners for some week two action in Norman. While UCLA showed in its meet against Arkansas it has a lot of room to grow, Oklahoma wasn’t absolutely perfect either. The Sooners are unlikely to lose this one due to being at home and just being the better team at this point in the year, but UCLA has an opportunity if it’s on the day of the competition and Oklahoma slips up. But the real test will be how the Bruins deal with some setbacks in Katelyn Ohashi’s sore shoulder and Angi Cipra’s ankle injury. Then there’s Ross not being 100 percent and a plethora of other issues that can only come with UCLA and January. Overcoming these obstacles will be the true factor in how well the Bruins before this weekend.

It’s a battle of the former elites! @uclagymnastics takes on @ou_wgymnastics Sunday at 5 p.m. ET! Who will be victorious? #NCAAgym

Other Notable Matchups
​No. 14 Kentucky at No. 3 Florida: Friday, Jan. 13 at 7 p.m.
Kentucky started off strong in its first meet of the season but left ample room for improvement. Meanwhile, Florida was basically Florida. But with the Gators finally coming home to their newly-renovated O’Dome, the scores should absolutely fly. The team is a tad depleted with no Ericha Fassbender this season, but it might be a non-issue depending on how the other team members step up to the challenge. Kentucky on the other hand, can’t really expect to win without mistakes from Florida. However, that won’t be the point for the Wildcats. Producing a strong road score after an average 195 last week will be the ultimate goal. And after the impressive start from the team’s freshmen, building on that success will also be an important goal for the future of the program.No. 6 Missouri at No. 12  Arkansas: Friday, Jan. 13 at 8 p.m.
Missouri started off extremely strong in its season and home opener last Friday. A mid-196 is again what the team should expect and strive for this week. The Tigers will get a boost from Morgan Porter if she competed, but it’s unknown yet whether she will be back from suspension. The Razorbacks are pretty evenly matched with the Tigers for this competition. Both have strong freshmen that will aid the handful of upperclassmen doing good work for their teams. The real deciding factor will be who has the stamina and mindset to get through all four events without counting any falls.

No. 5 Utah at No. 21 BYU: Friday, Jan. 13 at 9 p.m.
The interesting factor with this competition isn’t whether or not Utah will win. It’s more about improving upon last week’s scores and getting mistakes out of the way before the heart of the season hits full stride. For Utah, this means some lineup shuffles and focusing on the details. For BYU, this should mean minimizing the deficit between it and the Utes — drilling landings, gluing their legs together, and staying on the apparatus.

No. 17 Minnesota, No. 25 Arizona,  Alaska at Maryland: Saturday, Jan. 14 at 4 p.m.
Last week, Arizona looked to be on pace for a good opener to its 2017 season. However, beam issues slipped the Gymcats down to a 194 total. That shouldn’t happen with Tabitha Yim as the leader. While there were improvements in other areas from 2016, vault in particular, but beam is an issue that needs to be addressed if Arizona wants to give Yim a good sophomore season. Minnesota, meanwhile, is still looking for an identity after Lindsay Mable’s graduation last year. The core of strong freshmen are a great addition to the squad and will be ones to watch during this meet. Maryland will give us another look at former Canadian elite Kirsten Peterman while Alaska will strive to prove it deserves to remain a DI team at the university.

No. 11 Michigan,  Washington,  Kent State at No. 20 Ohio State: Saturday, Jan. 14 at 4 p.m.
Michigan came into its meet with Utah as a contender to walk out of Salt Lake City with a win. However, mistakes on bars in particular dashed those dreams. And it wasn’t just freshman errors as upperclassmen faltered as well. Cleaning up what looked to be uncharacteristic errors brought up by nerves or slight unpreparedness shouldn’t be a huge task. However, another couple of falls and don’t be surprised if Washington or even Ohio State or Kent State take advantage as all three squads have the potential to be mid-196 on a great day. Washington and Kent State will be making their 2017 debuts so expect the routines to be more rough around the edges. Meanwhile, Ohio State has one meet already under its belt and an idea of where it needs to improve upon to challenge Saturday.

Arizona State, TWU, Air Force at No. 7 Denver: Saturday, Jan. 14 at 8 p.m.
The new era of Arizona State will continue in this quad meet at Denver, Saturday. The Sundevils looked much improved from 2016 despite the lower score. But more importantly, the gymnasts looked happier (and stunning on those ombre leos!). Denver might have lost Nina McGee but is back on people’s radars now with a new superstar in freshman Maddie Karr. And she’ll be a crucial part of any success the Pioneers want to have this year. But this competition is really split in two. Denver is the clear leader of the pack while Arizona State, TWU and Air Force will be fighting with each other for the second and third positions as all are pretty evenly matched.​

No. 18 Penn State at Nebraska: Sunday, Jan. 15 at 2 p.m.
While Penn State already has 2017 experience under its belt, Nebraska will be fresh off a bye to start the weekend. The meet will mark the debut of coveted freshman Taylor Houchin, who is expected to do things for Nebraska’s already small roster that has gotten even smaller no thanks to injuries. Penn State had highs and lows week one — Sabrina Garcia’s 9.95 on bars was the second-best mark of the entire weekend but the Nittany Lions also counted a fall and a 9.650 in the same rotation. Consistency will be key Sunday if it wants to knock off the Huskers.

California at No. 24 Iowa: Sunday, Jan. 15 at 3 p.m.
Cal got off to a phenomenal start Monday, winning its third-straight NorCal Classic and producing a vault total higher than any in 2016. Veterans returned to the places they were last season while newcomers showed they’ll be great additions to the squad, despite a few nerves here and there. The Golden Bears will also hopefully have Zoe Draghi back on beam and floor after feeling under the weather Monday — making the team that much more formidable. Iowa, on the other hand, should have a lot of motivation to improve from its first meet where it was upset by Northern Illinois and only managed a 47.850 on bars. However, freshman Charlotte Sullivan, a former elite form new Zealand, performed well, winning herself the Big 10 Freshman of the Week award.

No. 15 N.C. State at Georgia: Monday, Jan. 16 at 2 p.m.
Georgia is given the opportunity to redeem itself twice this weekend, competing first at AUburn then going home to open its season in Athens against N.C. State. The question will really be whether Georgia will be digging itself out of a deeper hole after Friday night’s meet or if it will continue on an upward trend after the meet. Because N.C. State isn’t an easy win by any means, especially with the start to the season the Gymdogs had. Getting GiGi Marino and Natalie Vaculik healthy and more difficulty and confidence from the other members will be an important factor in the success of the team during week-two action. N.C. State will also use its strong underclassmen in the Phillips twins and Alexis Beucler to contend with the Gymdogs. Those paired with returning veterans might be able to put up a solid fight.​

These aren’t the only meets happening this weekend! To see all the matchups all in one place, take a look at our master schedule. You can also find live scoring and video links below.
Do you play Fantasy Gymnastics and don’t see a team some of your gymnasts’ teams competing this weekend? See if they’re on a bye this week (or competing twice) below, and check out the entire byes and doubles list here.
Want to receive the latest collegiate gymnastics news in your inbox? Sign up for the NCAA Gym NewsLetter here.
Facebook0Tweet0Pin0