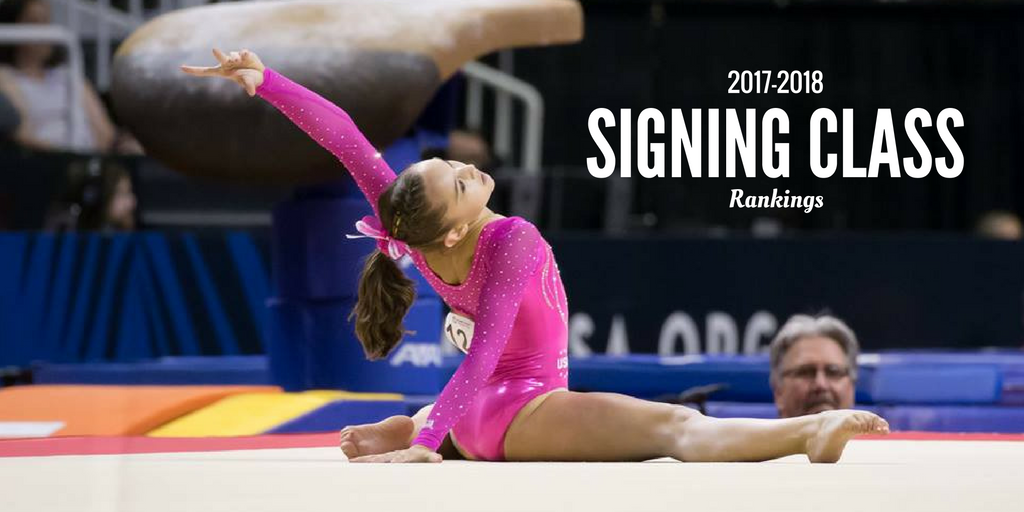 There are still some singing classes yet to be completed. But with most of the notable teams having rounded out their group of newcomers, it’s time to take a look at which schools had the best week. We ranked classes based off which we think will help their future school the most. It could be a class of elites, a group of standout level 10s or a mixture. We also factored in what the team might be losing, where it’s weak and other similar things such as injury history and past performance. Don’t agree with our rankings or think we missed a team? Let us know your thoughts in the comments! 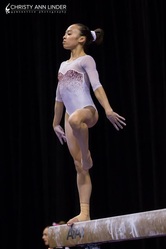 Kyla Bryant, Rachael Flam, Taylor Lawson, Lauren Navarro, Catherine Rogers
This is a huge class by Stanford’s standards, and it’s a great one too. Bryant is probably the best level 10 in the country in this signing class and has all the abilities to shine in the NCAA. Flam and Navarro also bring elite experience as well as unique skills and artistry. Lawson hails from the infamous Parkette’s that’s known for producing top gymnasts and Rogers isn’t a half-bad level 10 herself. For a program that normally struggles to even put six gymnasts up on each event, these signees will have an immediate influence on not only depth but high-scoring routines as well. 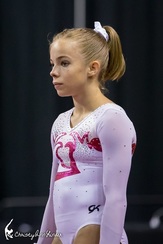 Samantha Durante, Ashley Foss, Madison McPherson, Marissa Oakley, Emily Schild
It was a battle with Stanford for the best class, but the Cardinal ultimately won out due to level of influence the class would bring to the program. However, this Georgia class wasn’t far behind. Emily Schild competed at the U.S. Olympic Trials and has one more year of elite until she wraps things up and heads off to aid Georgia’s championship hopes. Foss is also a former elite with polish and big skills that will certainly be featured in a number of Georgia lineups. Oakley is coming off that severe ankle injury but is another elite that has the potential for a big influence. Walk-ons Samantha Durante, daughter of head coach Danna, and Madison McPherson, both of Georgia Elite in Athens, will contribute as well. Durante isn’t the typical walk-on and could have earned a scholarship at any big-name school. However, she chose to stay home and learn from her mother, and Georgia’s probably all too glad. 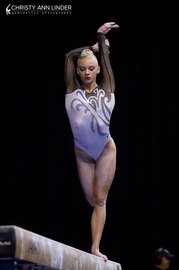 Alyssa Baumann, Vanasia Bradley, Megan Skaggs
On paper, Florida probably has the best class. However, looking deeper reveals some question marks the trio will have to clear up. Baumann was a contender for the 2016 Olympic team before suffering a severe elbow injury that not only forced her to pull out of the Olympic Trials but also to defer starting at Florida for a year. Her health will be the main determining factor in how effective she is in Gainesville. The same goes for Bradley as well. She started out with success in the junior ranks and had some people calling her the next big thing. But a couple of knee injuries has had her MIA since. With no idea what level she’s even at, she’s a bigger question mark than Baumann for her NCAA career. Finally there’s Megan Skaggs, who’s leaps are to-die-for. But she’s powerful as well, making her potentially the upstart of the class. The main thing, though, is the little amount of routines Florida is losing. With just Claire Boyce in the 2016 senior class, any routines the Gators get from this group will be added depth. 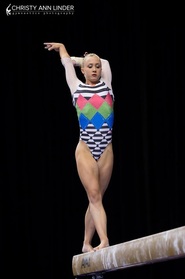 Kylie Dickson, Lexie Graber, Bailie Key, Alonza Klopfer, Kaitlynn Scott (walk-on)
This is a strong class that will have to come in and produce with the number of routines being lost by the senior class in Katie Bailey, Amanda Jetter, Keely McNeer, Mary Lillian Sanders, Aja Sims and Mackenzie Valentin – that’s 10 routines from the 2016 Super Six alone (and we all know how much head coach Dana Duckworth likes to play around with depth). But this signing class is capable of helping with the loss. Key should be the star. We do say “should,” though, because she’s had some injury issues in the past. However, after switching her commitment from Florida, she seems happy, so settling into a comfortable environment should do well for her. Klopfer and Graber are also great level 10s and should contribute routines on at least a couple events. Dickson brings baggage with her, being known as the Belarusian-American who competed at the Olympics. However, if she can shut it out and water down her routines to become more consistent, she has a shot as succeeding in the NCAA. Finally, Scott plans to walk onto the team. But she’s not your typical non-scholarship athlete. Hailing from well-known club gym Metroplex, Scott could provide added depth on the events. 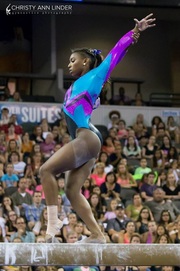 Nia Dennis, Pauline Tratz, Lilia Waller (walk-on)
Only two girls signed, but the two aren’t too shabby. Nia Dennis spent most of her 2016 season recovering from a torn Achilles but has shown her prowess on bars, an event UCLA has struggled on in the past. Adding Dennis to a bar lineup already featuring the Olympic silver medalist on the event in Madison Kocian and Olympian Kyla Ross as well as JaNay Honest, Katelyn Ohashi and Grace and Anna Glenn and you’ve got a rotation you can already start looking forward to. Then there’s Tratz who comes with her own list of accolades. The German National Team member competed at the test event for her country, helping it qualify to the Rio Olympics. She’s UCLA’s random international signee of the year, but she’s a good one at that. But let’s not fool ourselves thinking UCLA’s freshman class for 2018 will stay at two gymnasts. Waller, younger daughter to assistant coach Chris Waller, has already signed to walk on and Francesca Lawal and Savannah Kooyman have noted their intentions of joining the team as well. It’s yet to be seen how big the class ends up being, but even if it says at two plus Waller, it’ll still be a good one, though comparatively small to other recent classes.

Reagan Campbell, Gracen Standley
LSU will be losing a phenomenal class after this season. Ashleigh Gnat has produced more 10s in a season than most other gymnasts and Sydney Ewing brings 9.9-worthy vault, beam and floor routines week-in and week-out. As of now, Campbell and Standley have work to do. It would be silly to think they would be able to come in and start scoring 10s or even 9.9s their freshmen year. However, if the duo wants any chance at replacing the work Gnat and Ewing. And don’t forget Shae Zamardi, whose bar capabilities will be missed, though her loss will be softened by this year’s freshmen. But as far as the signees go, Campbell, a Texas Dreams product, is one of those level 10s that’s so good, she often had people wondering why she never tried elite. Standley is also a great J.O. gymnast. Bridget Dean of Orlando Metro was also supposed to be in this signing class but was not announced with the others in the official press release. It’s yet to be seen whether she will sign in the spring or whether LSU will pick up a surprise commit.

Ona Loper, Lexi Montgomery, Lexy Ramler
Ramler has the potential of being the next Lindsay Mable for the Gophers. A second-tier elite, she has the unique skills to wow the crowd as well as the tight form to impress the judges. We’re calling it now — Ramler will be a fan favorite from the moment she steps out on the competition floor in Minneapolis. Montgomery and Loper are great additions as well, providing depth on the events but more importantly, have the potential to shine in their own rights.

Lauren Farley, Sydney Townsend
Townsend is the get of this class. She was a member of the 2015 Canadian World Championship team that qualified her country straight to the Rio Olympics. She also represented Canada at the Youth Olympic Games and has the potential of doing more international damage for her country in 2017. Farley, on the other hand, is a former American elite and current J.O. national champion. She hails from WOGA, so we already know her form will be pristine — something NCAA judges drool over. The duo will score big for Michigan. However, it will be losing Nicole Artz and Talia Chiarelli — huge losses for the Wolverines. Those shoes will be big ones to fill, and it remains to be seen whether or not Townsend and Farley are up to the task.

Jordan Draper, Abigail Matthews, Evy Schoepfer, Anastasia Webb
On paper, this class appears weaker than some of Oklahoma’s past ones. However, you can never count out a group of level 10s once head coach KJ Kindler gets her hands on them. Kindler has been known to turn standout level 10s into NCAA stars. Take Haley Scaman, Chayse Capps and AJ Jackson, for example. Webb is a J.O. National Team member and Matthews and Schoepfer have a handful of top 10 finishes at national championships as well. Only time will tell if this class is another group of Kindler’s genius finds or more middle-of-the-pack depth providers.

Kyana George, Alma Kuc, Victoria Salem, Nina Shank
California will be hurting some after Toni-Ann Williams graduates. However, the class the Bears are bringing should help remedy that. George has been a solid level 10 for quite some time now and Kuc has competed internationally for Poland. Salem and Shank are also strong contenders for lineup spots with so many seniors graduating. Plus, there’s still room in the signing class for two gymnasts, if our calculations are correct. So there’s time left in the spring for an additional signee or two to help with the transition even more.

Utah
Alexia Burch, Sydney Soloski
Utah’s depth will likely suffer some this coming season, but with the loss of senior all arounder Baely Rowe, they’ll need some help making up the lost ground. Soloski was a strong Canadian elite, representing her country well internationally in 2014 before breaking her foot. However, she came back strong in 2016, taking the silver medal on floor at one of the World Challenge Cups. And Burch is a former J.O. national champion, so her well-rounded set should definitely work to the Utes’ advantage.Penn State
Alissa Bonsall, Lauren Bridgens, Kourtney Chinnery, Ava Lorein Verdeflor
Though there are still concerns about the atmosphere at PSU, we can’t let that affect how we look at its signing class. Verdeflor is a real steal for the Lions, and her elite experience and groundbreaking accomplishments for the Philippines should translate well to mental toughness and a wide skill vocabulary. Bonsall is a former state champion on almost every event, including the all around, so her well-rounded set should be an asset to Penn State. Bridgens has clean lines, which should make her successful in NCAA competition, and Chinnery’s power and sass should really up the team’s competitive edge on floor.
Facebook0Tweet0Pin0 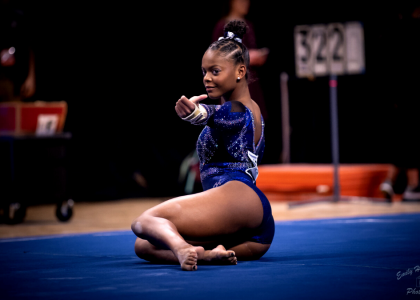